*Opens up laptop on Sunday afternoon… i need to go out for a family BBQ in just under 2 hours, but that’s plenty of time to write about how i have managed with my weekly goal…

20 minutes later… TV is on.. and hubby is sitting watching said TV… feeling pretty distracted and my hay fever is KILLING me! urgh… why cant i type anything??? Come ON fingers….. type… *willing brain to tell fingers what buttons to press.. stupid brain.. is there such a thing as Sunday brain?? if not, there should be.. i have it for sure!

It seems like being unproductive is a running theme for me this week…feeling pretty negative.. going to try again later!!!

*Returns after BBQ (and Pimms), had a lovely family Sunday feeling a LOT calmer, although the hay fever is still driving me crazy, when is the pollen count going back down again?

So its Sunday again, (how does that happen so fast, Friday never happens that fast does it??) this weekend has felt like it was Friday and then i blinked, and now its Sunday, to be honest i feel like the whole of last week was like that and rather unproductive if i’m honest it started pretty early on in the week which you can see in my weekly update.  .

This week i wanted to take time to relax, to chill out without technology and to help myself set aside time to get my thoughts and feelings in order as i have a habit of not doing that and then it all builds up and i either implode into a pit of anxiety or explode on the people around me.. neither of which is any fun for anyone, the idea was to do this whilst mindlessly colouring in whiling away the hours! (sounds great huh?)

I wish i could say that every night i sat down for the time i had set aside and coloured in and relaxed for the whole time, unfortunately life just got in the way, like it does for all of us, before i knew it a couple of days had past and i just hadn’t had a chance. I feel pretty annoyed at myself for not doing what i set out to do because it really does benefit me when i do, but i am grateful for the time i did take out to be more mindful and do some colouring!

Unfortunately this weeks goals were not met with as much success as last weeks, as you can see here they were pretty successful, and i have spent some time this week discussing with other people who have been through menopause early, had failed IVF along with healthcare professionals to work on ways in which we can work together and raise awareness and especially for younger people, get them thinking about there fertility a little earlier, and it all sounds pretty promising and truthfully, pretty exiting, if anyone reading this would like to get involved please please get in touch!

Anyway, back to the weekly goal…

What i did manage to get done is a couple of smaller ones…. what do you think? 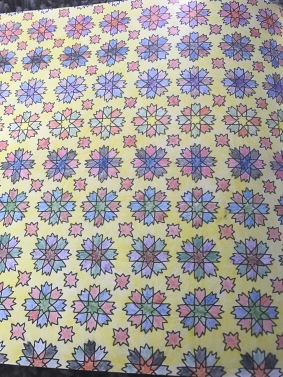 Its also been great to hear from some of my infertility friends who have been trying out a bit of adult colouring too.. i’m telling you.. there is something in the group colouring/chatting/drinking tea support group idea!

Despite not being quite as pro active as i would had liked this week i really recommend setting goals for yourself, on a daily, weekly or even monthly basis, it helps to steer the mind into doing something productive and makes you think about what might be missing for you to live a fulfilled and happy life!

So.. just for fun… if you could set your self a goal for this week, what would it be and why? Let me know in the comments !!

Other posts from me from this past week;

Pregnancy announcements – How to deal with them.

4 thoughts on “When life takes over…”